The Bruce Trail: Every Trail Has A Story

The following piece originally appeared on our sister publication JustSayinCaledon.com and was written by JSC guest author Skid Crease. The Bruce Trail which runs 900km from Tobermory to Niagara travels through the Georgian Bay Area and the local club is the Blue Mountains Bruce Trail Club.

Recently, it was my honour to be asked to be the “Inspirational Speaker” at the Toronto Bruce Trail Club’s Annual General Meeting. For the second year in a row, their AGM had to go online because of pandemic concerns. This was going to be a challenge, partly because I am a technophobe, and partly because the Bruce Trail is sacred ground for me. In these chaotic times, I wanted to ensure I would deliver that much needed inspiration.

For those new to Ontario, the Bruce Trail was founded in 1960 when four members of the Federation of Ontario Naturalists – Norman Pearson, Ray Lowes, Dr. Robert MacLaren and Dr. Philip Gosling – met to discuss Lowes’s vision of a hiking path that would span the entire Niagara Escarpment.

By 1963, the Bruce Trail Association had incorporated – three years from vision to action. The journey continues to this day with Clubs from nine different sections united in care, conservation and education for the Bruce Trail Conservancy. The Toronto Section runs from Kelso to Cheltenham where my own Caledon Section begins.

My personal history with the Trail began in 1968, with many a solo hike to release the stress of the first years of teaching. In those days there were overnight campsites and cooking areas and access to springs. In 1972, I switched from Elementary to Middle School and thus began eight years of leading student hikes on a “5 day 50 mile” Bruce Trail hike during the last week of September. That was the beginning of a long term relationship culminating with my decade at the Mono Cliffs Outdoor Education Centre right beside the Bruce Trail.

This keynote was much more than another speaking engagement. This was a thank you from the heart and I didn’t want to miss. However, as a public speaker, I am used to live audiences where you can interact, feel the energy, work the room, and physically engage the participants. This online concept was actually making me a little nervous.

Add to that, the frequent and detailed reminders that hit my emailbox alerting me that the meeting was coming, and to get ready for the rehearsal.  Usually when I speak at a conference, I am given a theme, I arrive, get a feel for the audience and then hit the stage, often for an hour straight. This one had a rehearsal. With a script. I was worried. I don’t do rehearsals. And I have never used a script.

When the day for their AGM rehearsal came, I prepared my computer for a ZOOM meeting and waited anxiously. I need not have worried. This rehearsal was to make sure that all of their online connections were working so that their 100 plus members attending in a week could engage, interact, ask questions, and vote. And the script was simply the organizational agenda for the meeting.

Best of all, I got to meet the thirteen members of the Board online.  This Toronto Bruce Trail Club Board was organized and efficient and diverse. Often on hiking trails in the past few years, I kept encountering kindly elderly folk in their Tilley hats and pants with their walking sticks eagerly sharing their nature wisdoms.

The thirteen faces I met on the screen were a diverse combination of cultural backgrounds, genders and ages. It was like a breath of fresh air. And to boot, they were technologically literate! The joke around our home is that I can light a fire in the pouring rain with a flint and steel, but I can’t turn on my cell phone.

The sequence of the meeting was confirmed, all the ZOOM buttons tested, the voting boxes checked, and the two hour meeting set for April 10, 2022.

It went off without a hitch. All of the Board’s careful planning smoothed the AGM into a much shorter online time and still managed to cover all of the business, financials, awards and tributes. During that time I learned more about the Toronto Club, the first to publish a statement on the need to encourage cultural diversity, inclusion, and awareness of social justice issues surrounding us all. 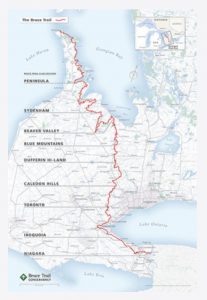 I was also reminded of the hard work of the volunteers who maintain and improve the trails through the GTA along the 45 km Toronto section that services the largest Club in the Bruce Trail’s 900 plus kilometres from Niagara to Tobermory. This Club has the biggest membership in the Conservancy and possibly the greatest responsibility to teach the very diverse Toronto Area population about how to walk lightly and responsibly on the land.

As more and more people come to our cities from around the world, we cannot assume that they all had joyous summer camp experiences or outdoor education opportunities in school or nature-based excursions with their parents. More and more the exact opposite is true. The Toronto Bruce Trail Club recognizes this, and the energy to deliver on that responsibility is reflected in their new Board of Directors, the “old wisdoms” of their many volunteers, and the enthusiasm of their members.

When it came time to conclude the meeting, my “inspirational keynote” spontaneously came straight from the heart. All I could see on my computer were a hundred little faces in boxes scrolling at top of my screen. It was hard to know if I had done my job, but the time for questions at the end turned into a series of thank-yous from the participants. I’m hoping it was enough to get this Toronto Bruce Trail Club inspired to take on another year of protecting the legacy and vision of our founders.

Every trail has a story. Every person is a storyteller. This is our story. The way I see it. Wye Marsh: From Skiing To Sweetwater Canoe Reflections on The Bay